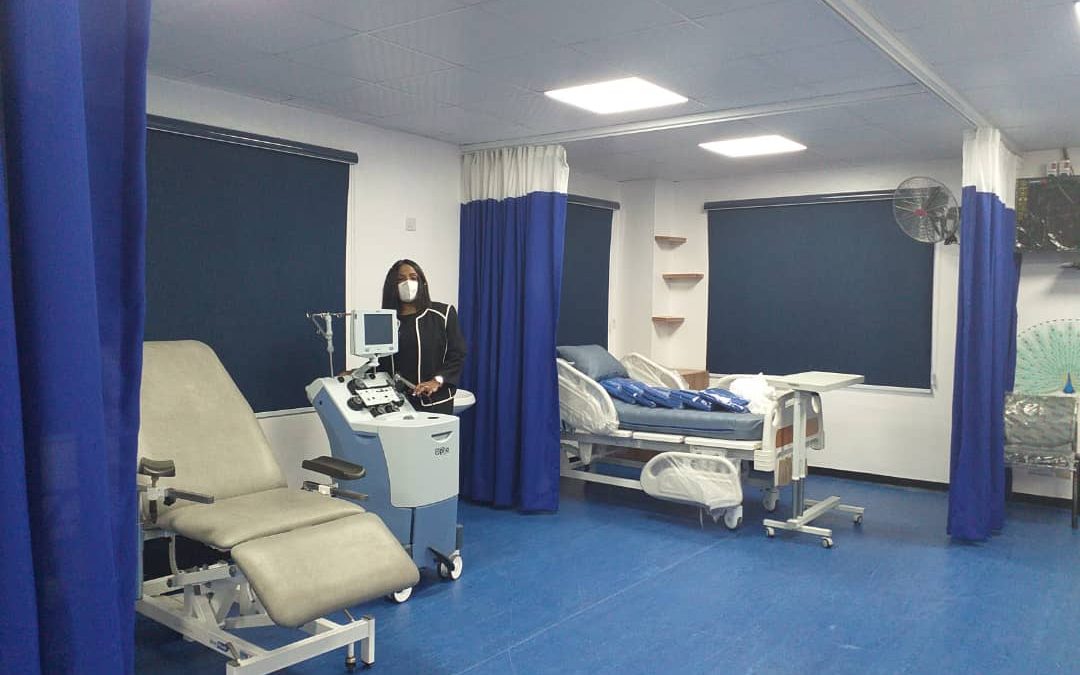 A giant stride was taken recently in the search for state of the art, technology-driven, and very effective treatment/management solution towards alleviating the pains, sufferings, and many times untimely deaths associated with Sickle Cell Disorders (SCD) in Nigeria, and also in Africa, when the Sickle Cell Foundation (SCFN) Nigeria and indeed Africa’s pioneer world-class SCD dedicated management and treatment healthcare institution, commissioned its refurbished Exchange Blood Transfusion (EBT) Unit in Lagos, South-West Nigeria.

In the words of Professor Olu Akinyanju, Chairman, Sickle Cell Foundation (SCFN) Nigeria during his speech at the event which took place at their office in Idi-Araba, Lagos State, South-West Nigeria, “Mr. Muyiwa Talabi (of blessed memories) for his 60th birthday celebration in 2009, his keen eyes observed that our major challenge then was that of poor power supply, and instead of having an elaborate birthday party, mobilized scarce resources to purchase a brand new 150 KVA generator for the National Sickle Cell Centre.”The commissioning, a collaborative efforts between the foundation and the surviving family members of Late Mr. Muyiwa Talabi, who took up the project as part of his and his family’s CSR initiative, was aimed at immortalizing and memorializing his name, because while he was alive in 2009, and to mark his 60th birthday back then, chose to divert scarce resources at his and his family’s disposal then from organizing an elaborate birthday bash for himself and the family, to solely purchasing a brand new 150KVA generator for the foundation and even later joined the Board of the foundation to enable him contribute towards it growth and development.

According to Prof. Akinyanju, “the process helps to sustain the patient’s hemoglobin at a sustainable level and also prevent or decreases iron overload associated with simple top-up transfusions…it is an automated system that takes out patient’s red blood cells and return the patient’s own plasma in addition to the Hb AA Donor red cells, so as to reduce the number of defective Hb SS Red Blood Cells while also controlling fluid balance.” He said the aim and beauty of the EBT process is to “reduce Hb SS to about 30 percent from the usual 85 to 90 percent occurrence in people with SCD.”  THE EBT UNIT: The Exchange Blood Transfusion (EBT) equipment in the centre helps to improve vital oxygen delivery, making clinical conditions more efficient than simple transfusions, by simultaneously replacing abnormal patients’ Red Blood Cell (RBCs) with normal donor Red Blood Cells (RBCs Hb AA).

MUYIWA TALABI:Mr. Muyiwa Talabi who later joined the Board of the foundation was a very valued member of the Board of Directors, whose contributions to the growth and development of the Centre was very significant, even serving as Chairman of the foundation’s Fund Raising Committee at some point in time during his lifetime.COMMENDATIONS: Prof. Akinyanju and Dr. Annette Akinsete, National Director / CEO of the Foundation along with a few others interview by LAGOS CITY NEWS, jointly commended Mrs. Busola Talabi, wife of Late Mr. Talabi, the children – Olumide and Olaolu Talabi who were all physically present for the event, for choosing to take on the huge project in addition to the one their late husband and father had kick-started  in 2009, to help “imortalise Muyiwa’s name” who himself was a Sickle Cell patient, and also bring relief to the now growing community of SCD patients. “Muyiwa was very passionate about the Sickle Cell cause and had huge plans to help bring the problem posed by SCD to its heel in Nigeria,” he told the audience.

GUEST SPEAKER AND OTHER REACTIONS: Earlier in her paper, Guest Speaker of the day, Dr. Titi Adeyemo, a Consultant Hematologist with the Lagos University Teaching Hospital (LUTH), Idi – Araba and also doubling as Consultant to the foundation, as well as Dr. Kola Adeyina, Medical Director of Legus Specialist Hospital, Lekki and Fadeyi Lagos, commended the Talabis for the initiative. For Dr. Adeyemo, “the EBT treatment model is a life saving treatment for people with SCD, the system will solve 2 day’s job in just 1 hour, thereby increasing the number of treatments per person and increasing the chances of survival in the long run for a greater majority of sufferers. For Dr. Adeyina, “it is a good start in the right direction. So, I call on well-meaning Nigerians and the corporate world to support the foundation’s course.

THE BURDEN: Sickle Cell is a complex disorder with variable and often unpredictable effects and severity from time to time and from person to person, even among affected siblings. The disorder is not as well understood as we think and it is certainly not amenable to various magical medications and portions optimistically marketed in Nigeria, hence more research is needed by corporate organizations and the pharmaceutical and medical world. Though not confined to Africa, figures indicate that 30 percent of affected children are still being born on the Continent.

DIGNITARIES: Some of the distinguished guests and dignitaries who were at the occasion which was very well social-distanced in view of the Covid-19 Pandemic advice of government, include Venerable Olowosile, Cardinal Residentiary; Dr. Akinsete, National Director / CEO, SCFN; Mrs. Gladys Talabi (Benefactor of the Day); Prof. Olu Alkinyanju, Chairman SCFN; Dr. Titi Adeyemo, Consultant Hematologist, LUTH and Supervising Consultant to the foundation; Canon and Mrs. Toriola;  Dr. and Mrs. Adeyina; Mr. Ebenezer Adeleye, Coordinator of the foundation and his wife Mrs. Adeleye.  Others include Mr. Olamide; Mrs. Abiola Ogunbiyi, a Director on the foundation’s Board;  Messers Olumide and Olaolu Talabi and Rev. Dr. Samuel Okoaje among others. 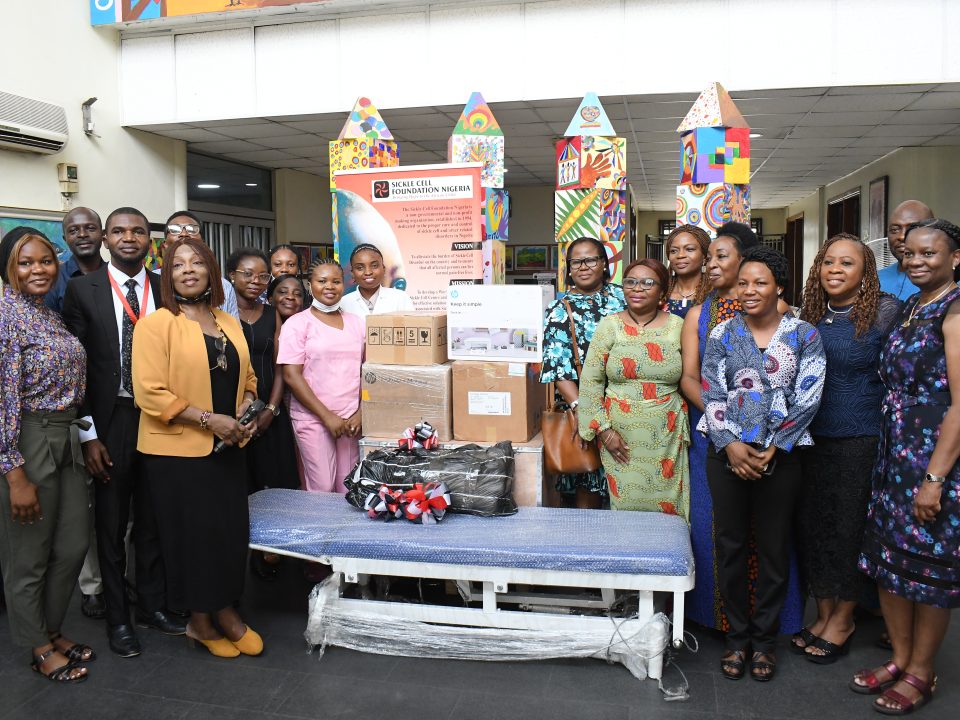 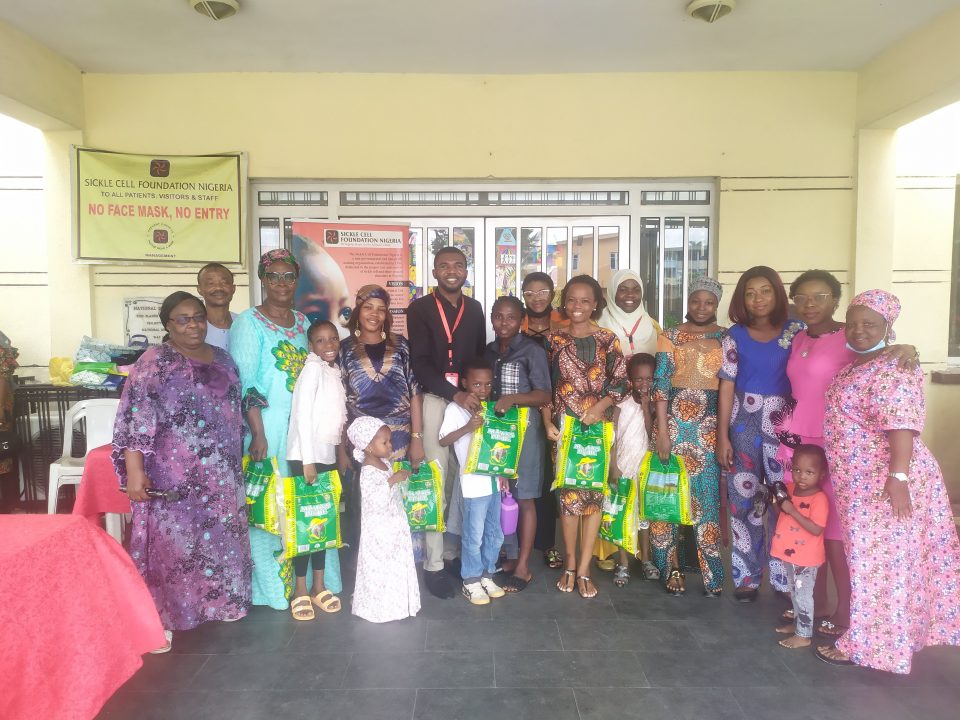